Yesterday, I was trying to tune out the world and get some serious writing done, when during one of my email/Twitter breaks THIS arrived in my inbox: 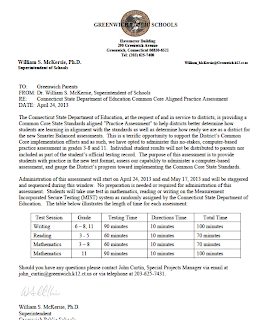 At which point I had a parental head explosion. I didn't even begin to talk to my 11th grader, who already has enough on her plate, about it last night. But I had to wonder what idiot with no comprehension of teenagers and their emotional lives had the GENIUS to decide that NOW would be a great time to add MORE TESTING - particularly testing thats stated aim is merely to give additional data to the district and the State Board of Education - to our teenagers lives.

For that particular rocket scientist - and Governor Dannel Malloy, and State Board of Education Commissioner Stefan Pryor, and everyone who is pushing this particular sick brand of corporate "education reform", all the way up to Arne Duncan and President Barack Obama, I'd like to give you a little insight about teenagers. I base my insights on the fact that I was a teenager, I parent two, in the course of my work as a YA author I spend a great deal of time with many others, and I happen to love this age group big time.

!. Teenagers are human beings. They are not data points. Please read this sentence over and over until you understand this concept before moving on to the next paragraph.

2. They are going through massive hormonal changes, which can be difficult to live with as a parent, but just as difficult to cope with as the teenager experiencing them, because you have these FEELINGS and they HAPPEN and you can't always control how and why.

3. Teenagers need more sleep than most age groups and get less of it, which has major implications for mood, stress, concentration, study ability.

4. Coming in between now and June, my particular 11th grader already has to take the SATS, AP exams and finals. When I finally discussed the proposed state testing with her this afternoon, she told me "that's just disrespectful." I agreed with her, 100%. She said, "It's one thing taking CAPT, when our teachers reduce our homework in our other classes. But to schedule those tests NOW?"

We adults expect respect from our teenagers. But to earn their respect, we must show them the respect they, too, deserve. Expecting them take an assessment test for data purposes when they are already facing so much pressure is not only disrespectful, it is unhealthy.

As adults, we should be modeling balance for our kids, not cruelty and insanity. The rate of suicide for the 15-24 age group has nearly tripled since 1960. Is it any wonder when the State Board of Ed treats our already stressed out teens like lab rats instead of human beings?

Last year, when the Education Reform Bill was before the CT State Legislature, I tried to get the Greenwich High School PTA to speak out against it, as PTA's in other towns were doing, because of the implications for increased testing. There was absolutely zero interest in getting involved. But lo and behold,now that the precious darlings in Greenwich are going to be affected, guess what arrived in my inbox today:

Yes, now that it's affecting OUR KIDS the Greenwich parents must have raised holy hell because that was one heck of a quick backdown by both our Greenwich Superintendent and our State BOE. You see, when parents from an extremely wealthy suburb start making a fuss, the State BOE is suddenly all ears.

But I challenge my fellow Greenwich parents - and indeed, the parents in all the other wealthy suburbs across the nation - to wake up and smell the coffee. They need to realize our reprieve was only temporary, not permanent. What the kids in Bridgeport, Windham, Hartford and New London are being forced to do this year while we got a pass, our kids are going to be doing in the years to come - while they are struggling with the same SATS, APs and finals. Oh, and maybe looking forward to going to Prom and all the other social and extra curricular activities that we want them to have as well-balanced, well-rounded kids.

There's a piece in the Atlantic, The Coming Revolution in Public Education that's a must read for every parent, grandparent and person who cares about having a healthy system of public education in this country. I also encourage you to join the Network for Public Education, and if you're in CT, like the PAA-CT Facebook page. Please join the fight now, before this insanity train moves even further down the track.


Posted by Sarah Darer Littman at 5:28 PM 4 comments: Links to this post