And the winner is...

So I went to Son's graduation yesterday prepared for a deluge: 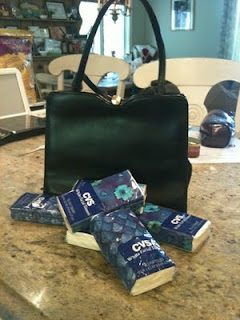 After all,it doesn't take a lot to get me going. I once cried watching a McDonald's commercial.

The entries ranged from a low of 5 (Peter) to a high of 2,650,000 (Gae - It felt like that much emotion, but would have needed a much bigger handbag for all those tissues!)

I think the number would have been much higher, if Son's speech hadn't been so darn FUNNY. I was laughing and crying at the same time! See for yourself. I think the kid has a future onstage. As Mr. Oncale, one of his amazing and influential teachers at Winston, said when giving him one of the drama awards, "He's always played old people but very, very well."


I ended up sobbing and laughing my way through a grand total of SEVEN tissues.

And so...*drum roll* the winner of the OMG WHERE HAS THE TIME GONE GUESS THE TISSUE CONTEST, with the closest guess of SIX tissues, is SHARI GREEN!

EDITED: I checked the entries on FB and this blog but forgot that Aurora M was having blogger issues and Tweeted me her entry of 7, which was SPOT ON! So I will send out not just one, but TWO copies of Life, After!

Congratulations Shari AND Aurora!! DM me on Facebook with your snail mail address and your signed copy of LIFE, AFTER will be on its way. I promise NOT to send you the soggy tissues as a souvenir.
Posted by Sarah Darer Littman at 7:51 AM 4 comments: Links to this post

Email ThisBlogThis!Share to TwitterShare to FacebookShare to Pinterest
Labels: Contests, Family, Life After

The OMG, Where did it go? LIFE, AFTER Contest

I was talking to someone last week and she observed, "You have a lot of transitions this year." I'd been feeling very stressed and unsettled recently and ascribed it to any number of things but that was one I hadn't pinpointed. But it's true. It's been a year where I've had to confront some very major life issues - like realizing I'm really in that "sandwich"generation part of life when we had to take the very difficult decision to put my dad, who has been suffering from Alzheimers (how I HATE HATE HATE that disease) into an assisted living facility in March. On my birthday. Happy Birthday, Sarah. You are really ARE middle aged.

And then there are the happy, joyous moments, like when my son turned 18 recently. 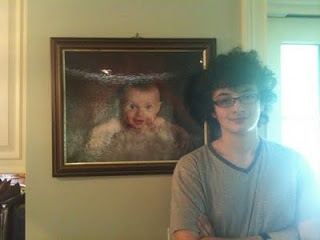 We had a big barbecue for his birthday, with family and his friends. His college and high school age friends played soccer and video games easily with his 1st grade and nursery school age cousins. It was a wonderful celebration. As I posted on Facebook that morning, "Eighteen years ago today, after 48 hours of labor, this smart, handsome kid was born. Like all really meaningful things in life, I had to work hard for him." 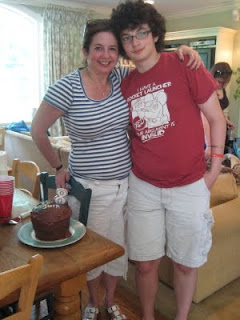 On Wednesday, Josh is graduating from high school. I keep hearing my Grandma Mollie, whose amazing singing voice I did NOT inherit, singing "Sunrise, Sunset" in my head, as teen me accompanies her on the piano.

Four years ago, in what I feel was a gift from G-d, but was probably more the vision of Executive Director Scott Bezsylko and Head of School Beth Sugerman and the wisdom the the school's Trustees, Winston Preparatory School decided to open a campus in Norwalk, CT.

When Beth told me that Josh was admitted, I started crying, so great was my relief that my son would finally be at a school where I thought his strengths would be appreciated and his areas of weaknesses supported. And most importantly, where he could feel safe. Things had gotten so bad that about a month before the end of 8th grade, I pulled him out of his middle school and said said I wasn't sending him back until they could provide him with a safe environment. The school's solution? To have him complete the year by doing independent study in the guidance office, thus further stigmatizing him.

Attending Winston Prep changed his life. It's not to much to say that it saved his life. When he was being bullied every day, his grades suffered. He was so depressed he was on medication that, it turned out from a later neuropsych we had done, slowed down his cognitive functioning, but it had helped him get through the pain of living through each day at school.

He touched on the both the depression and the bullying when he asked about "life is hopeless" and "mortal enemies" in our now famous StoryCorps interview, which was when he was in 7th grade:

The environment at Winston has allowed Josh to thrive and grow into the young man he is today - someone who really cares about what is going on in the world, who has been following the Arab Spring as avidly as some other teens follow the World Series or the World Cup, who will greet me first thing in the morning with "Did you see what is going on in Misrata?" or "Who do you think is worse, Gaddafi or Assad?"

His teachers have inspired him, helped him, pushed him, and coached him through the social issues that he needed to work on. Since his junior year, he's been taking classes at Norwalk Community College, to further broaden his education and to help him learn to transition to college and learn to start advocating for himself in a college environment.

On Wednesday, he's graduating. I've spent a lot of time over the last few weeks thinking about all the work it's taken to get him here. The PPT's when he was in the public school system where getting every accommodation was like fighting a battle with Goliath - particularly the one in third grade where the Vice Principal of his elementary school sat across the table from me and told me that his problems in school weren't because he had Asperger's Syndrome, they were because I'd been hospitalized with a nervous breakdown. (I'm looking at YOU, Damaris Rau, you EVIL woman, who should never, ever, be allowed near special ed children or parents). When we left the meeting, the psychologist who'd done the neuropsych eval of Josh asked me if I was okay, and said she'd never heard anything like that in her entire career.

It's been a long road, and it's been a very hard and bumpy road at times, like that PPT. But when I look at my son today,I am so unutterably proud. And happy. And sad. Because I'm going to desperately miss his morning political reports next year. And his hilarious, sardonic one-liners, delivered in that deadpan English accent.

So you're probably wondering by now, where's the contest?! Didn't she mention a contest?! I thought I was going to win a book and I get all this freaking mushy stuff!

WELL, HERE IT IS!

Josh is giving a speech on Wednesday at graduation. I am going to cry. 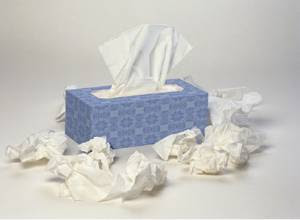 GUESS HOW MANY TISSUES I WILL GO THROUGH AT JOSH'S GRADUATION.

The closest answer wins a signed copy of LIFE, AFTER - if you already have LIFE, AFTER, you can wait till WTGP comes out and I'll give you a copy of that.

Enter in comments. If you tweet contest +1 entry. Make sure you @sarahdarerlitt so I know.
Posted by Sarah Darer Littman at 8:31 AM 6 comments: Links to this post