In which I need to take some advice from my 25 year old self... 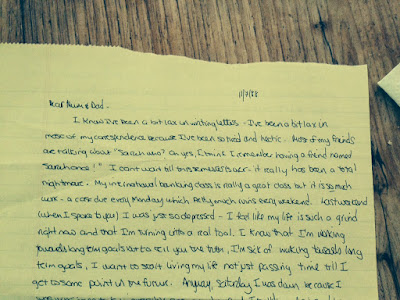 My mother kept everything, which means that going through her apartment is overwhelming, but also filled with gifts from the past. Yesterday, I found a set of CD's that were converted from tapes, which were converted from stenographs made by my late grandfather Murray, who worked with William Randoph Hearst, with United Artists, and was President of 20th Century Fox International. Grandpa died when I was 6, so my memories of him are mostly of him and Grandma taking me to FAO Schwartz (which itself is now going to be just a memory) to buy my first Barbie - who had red hair.
But thanks to this oft-converted technology, I'm now listening to my grandfather's voice (with his amazing New Yawk accent) telling stories about Alexander Korda, how Korda discovered Vivian Lee, Korda's relationship with Churchill, and all sorts of incredible stuff. And that's just halfway through disc one.

I also found a folder of letters I'd written to my parents in the late 80's, when I was working on Wall St and going to  NYU business school at night for my MBA. This letter was written when I was almost finished with the MBA, but clearly feeling the strain.

"I know that I'm working toward long term goals, but to tell you the truth, I'm sick of working towards long-term goals, I want start living my life, not just passing time till I get to some point in the future."

At this particular point in time, I really needed to read those words from my younger, and apparently wiser and more clearer thinking self. Fifty-two year old me is still equally as goal oriented, ambitious, and hard working. Some things never change. What has changed is that I'm now putting that ambition towards a career that I really love, the one that I wanted to have all along but was told would never make me any money. I love my work, and so I don't mind working the hours I do, because most of the time, it doesn't feel like work.

But this summer has been crazy stressful. It's the third summer in a row that I have not one, but two books due at the end of the summer. One is a revision that had to be put off because of Mom's unexpected passing, and I'm grateful for that delay, because there's no way I could have tackled it back in March/April. The other is a totally new work, which I'm super excited about, but we haven't officially announced yet.

This week, one of my really good friends, Maura Keaney, was visiting from Virginia with her young son, and she invited me to go to the beach with them. I haven't been to the beach in my town in over two years. Maybe three, because I've spent the summer on book deadlines. I call my mid-life crisis convertible "the beach" because running errands in it, or driving to teaching jobs is the only time I get sun. When she posted pictures from Island Beach, I regretted that I wasn't able to spend the time with them catching up and making sandcastles. I love making sandcastles. I miss having the time to make sandcastles.

But Mom's apartment isn't going to clear out itself. My books won't write themselves.  As Robert Frost said so beautifully in one of my favorite poems: "But I have promises to keep and miles to go before I sleep."

Still, I am listening to 25 year old Sarah. If 27 years later, I still feel the same way, I think it's pretty important to take heed of her words. Mom's death taught me that we never know when the last day will come, and I don't want mine to come when I'm still waiting for that distant point in the future when I get to stop and smell the roses. Or make the time to meet with friends I really care about and build sandcastles with their children.
Posted by Sarah Darer Littman at 8:05 AM No comments: Links to this post

Dads of Daughters: This is how you do it

Ever since Mom passed away suddenly and unexpectedly in March, we've been going through her apartment, trying to get the place ready for sale. Mom saved everything. EVERYTHING.

Today I found the speech that my father gave at my wedding. Of course, I heard it before, on Sept 3rd, 1989, but that was a long time ago, and I was pretty overwhelmed with emotions on the day. I remember crying at the time, but today when I found it, I cried again for completely different reasons. My father died in November 2013, but even before that he had lost the incredible intelligence and way with words that made him the man he was to Alzheimer's. But not the love for us. He never lost that. His eyes always lit up when he saw us, even if he didn't remember our names.

Finding this speech brought my father back to me and made me miss him all over again. But it also reminded me of how much of who I am is because of who he and Mom were. If I am brave, it was because Dad and Mom were brave. If I have the courage to stand up for what is right, it is because he and Mom were courageous.

If I have now found the love and support of a good man who respects my intelligence, it is because my father deeply loved my mother and respected her intelligence.

Fathers of daughters: This is how you do it. 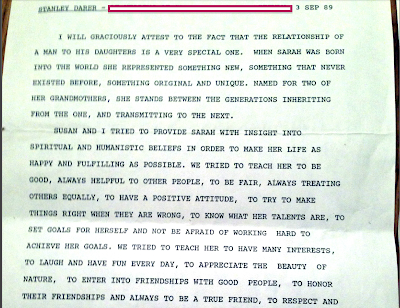 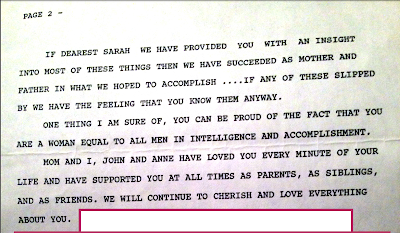 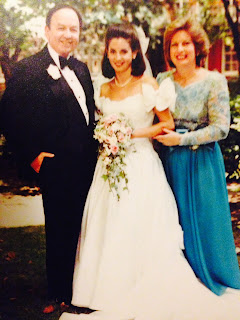 Posted by Sarah Darer Littman at 10:11 PM 5 comments: Links to this post