I've spent a great deal of refreshing time off line in the last 10 days while practicing for and singing in the Temple Beth El choir for the High Holy Days. That detox was really needed, especially given how ugly things have become recently.

I'm one of those people who always reads the footnotes and the acknowledgements when I read books, and when I'm in synagogue I'm no different - some of the most interesting stuff about the Torah is found in the commentary. This quote about ritual in the High Holy day machzor really struck a chord with me: 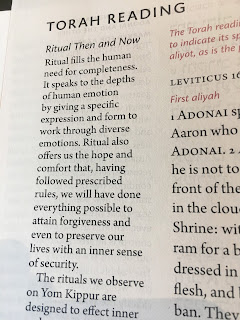 "Ritual fills the human need for completeness. It speaks to the depth of human emotion by giving a specific form to work through diverse emotions."

This resonated with me on so many levels. Firstly, as the parent of a kid who grew up on the autistic spectrum, I know how important ritualistic behavior can be for dealing with emotions like anxiety, anger, insecurity, even happiness.

But it's not just for those on the AS. Go through the experience of losing both of my parents in rapid succession, Dad to the long, slow, painful goodbye of Alzheimer's and Mom to the sudden, unexpected and no change to say goodbye of a DVT, made me appreciate how humane and necessary the rituals of shiva and mourning in the Jewish faith are to dealing with grief. Shiva, while exhausting, reminds you that you are not alone in your grief, that you are loved, and that you have community to support you. In the case of my dad, where I'd only been allowing myself to remember my dad as he was at that very moment during the Alzheimer's descent, because thinking about him as he was before was too painful, shiva was a time where we all could start to reconnect back with "real Dad" - the one we'd started to lose so many years before. We put together a slideshow that played throughout of pictures of him throughout his life and it gave us a chance to talk about him and tell stories and remember the man we missed so much and had been missing so much all through the Alzheimer's journey.

With Mom, her death was so sudden and unexpected, and came so soon on the heels of losing Dad, that the grief felt like it was bottomless and never-ending. But I had children, book deadlines and a mortgage and health insurance to pay. I couldn't let myself give into the grief. I had to get up and persist - as one does. But the grief was there, always. The ritual of going to synagogue to say kaddish for a year was healing because it meant that I wasn't just allowed, but prescribed to recognize that I was still mourning, even though I was still having to pick myself up and get on with life, because that's what you do.

On certain Jewish holidays, there's the Yizkor service, in which we remember those who have passed on before us. In Orthodox Congregations, they ask everyone whose parents are still living to leave. Because I'd been attending an orthodox congregation before my parents died, I'd never been in a Yizkor service until after my father died. I remember the Yom Kippur service very shortly before Dad died. I'd spent Kol Nidre with him instead of going to services, and I knew he wasn't going to make it until the following year. When my son and I went outside for Yizkor, I started crying and I said to my son, "This is the last time I'm going to be outside for Yizkor." And it was.

Now I attend a conservative synagogue and I realized yesterday as I was crying my way through the beautiful Yizkor service that there were young kids in the room and that people hadn't been asked to leave if their parents were alive. I was talking to my husband about it this morning, and we both thought how much healthier it is. Sure, kids might get scared by seeing their parents cry, but they also realize that mourning people you love is natural and part of life - and that it's okay to cry. I remember when I was at Silver Hill, and I told the psychiatrist that I always cried in the shower because I didn't want my kids to see me cry. He said: "What's the matter with letting them see you cry?"

That was one of the "aha" moments when I realized that it was okay to be human, not "perfect".

There are so many different kinds of ritual that can provide comfort - they don't necessarily have to be religious. But there is comfort and meaning in ritual - especially when community is a part of it.

Posted by Sarah Darer Littman at 8:58 AM No comments: Links to this post