Why Google's algorithms are sexist and FAIL

I was sick and tired of getting the same ad from the same wealthy "I'm going to try to buy the CT SEN election again" politician on EVERY. SINGLE. WEBSITE I visit, so I clicked on the Google Adsense button to see if there was some way I could opt out of receiving it. And boy, did I learn some interesting things about myself and Google's algorithm from that experience.

Here's what Google thinks about me: 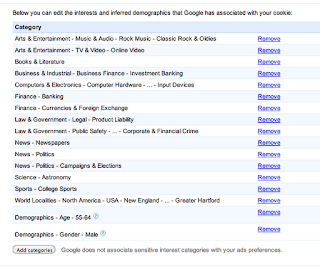 Yep - apparently, based on my searches, I am a male between the ages of 55-64. On what would Google possibly be making that assumption, I wonder? Because I'm searching Finance? News and Politics? Science?  C'mon Google... I've got some "womanly things" like "Books and Literature" and "Arts and Entertainment". What would it take for me to convince you that I'm a female, Google Geeks? Searching for the Kardashians? Justin Bieber? Breast implants? Shoes?

This makes me furious - because it's so inherently sexist. Why does a keen interest in politics automatically make me male? Women often bear the brunt of the political policies wrought by men for ideological reasons - be it cutting social services, defunding Planned Parenthood, or...well, I could go on. We need to be politically aware and active to protect ourselves and our children's futures.

As for finance - well, look what a smashing job the Old Boys Network has done with our financial infrastructure. Is it any wonder that I take an interest in what's going on when the future financial stability of the country has been in the hands of people who are so grossly dishonest, greedy and incompetent, presided over by an enabling Congress?

If that makes me a man, well, send me my Man Card. And while you're at it Google Geeks, how about you guys do the dishes and cook and do the grocery shopping and laundry and all many things I do as well as my "manly" interests, while working my freelance jobs and raising two children with better values than any of these so called "men" appear to have.

And PS Google Ad Geeks:  - I'd really like to not see that ad again.  Even if it is from a woman.
Posted by Sarah Darer Littman at 12:43 PM