Finding the courage to question


On Veteran's Day, at 6pm, there will be a random drawing for a set of 10 copies of ANYTHING BUT OKAY for your classroom or book club. You'll get an entry for retweeting this post (please tag me @sarahdarerlitt and hashtag #anythingbutokay) and additional entries for retweeting each of the posts between now and Veteran's Day. Rachel Alpine wrote a great teaching/reading guide, which you can download from my website.


For over 14 years, I wrote political opinion columns - for the Hearst CT papers (Greenwich Time/Stamford Advocate) and then for CTNewsJunkie. I stopped writing regularly in mid-2017, because the toxicity of being a woman writing opinion online was starting to affect my ability to write fiction. Getting sent rape threats and pictures of concentration camps can do that to a person. I had to preserve the mental space and creativity to write what actually pays my bills.

It wasn't a decision I felt good about, because in allowing my voice to be silenced, it felt like letting the trolls win. But not entirely, as it turns out, because ANYTHING BUT OKAY turned out to be one of the most political books I've ever written. 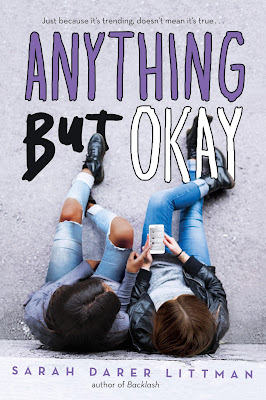 One of the questions I was determined to explore in this book was "What is a patriot?" It's one I've been pondering for a long time, because I have been called unpatriotic so many times as a journalist, merely for asking questions about government policy. I wrote about that in this column dated July 8th, 2008. (click here for full size PDF for easier reading.) 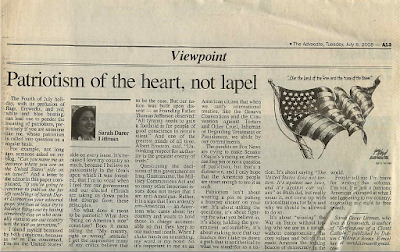 A few days later, this Letter to the Editor appeared in the paper, written by a Greenwich resident and WWII veteran named Richard P. Petrizzi. 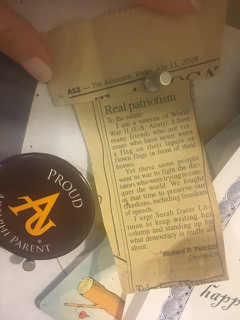 To the editor:
I am a veteran of World War II (U.S. Army).I have many friends who are veterans who have never worn a flag on their lapels or flow flags in front of their homes.

Yet these same people went to war to fight the dictators who were trying to conquer the world. We fought at that time to preserve our freedoms, including freedom of speech.

I urge Sarah Darer Littman to keep writing her column and standing up for what democracy is really all about.

His words meant so much to me. I cut that letter out and pinned it above my desk. Whenever I felt like giving up, or people warned me to be careful about pissing off too many powerful people, I'd look up at his letter and keep going. I wish, more than anything, I'd written to him at the time to tell him how much what he said meant to me, and how his words gave me courage. Unfortunately, by the time I tried to contact him he had already passed.


There's a lesson here: Don't wait to tell people when they've influenced your life for good.

But more than that, there's the idea that patriotism isn't about outward trappings. It's not about how big of a flag you wave, or simply calling yourself a patriot in your Twitter handle and then sending hate speech to everyone who doesn't agree with you. It's not about "My Country - Right or Wrong." Rather it's about what Senator Carl Schurz said in a speech on October 17th, 1899:

“I confidently trust that the American people will prove themselves … too wise not to detect the false pride or the dangerous ambitions or the selfish schemes which so often hide themselves under that deceptive cry of mock patriotism: ‘Our country, right or wrong!’ They will not fail to recognize that our dignity, our free institutions and the peace and welfare of this and coming generations of Americans will be secure only as we cling to the watchword of true patriotism: ‘Our country—when right to be kept right; when wrong to be put right.’”—Schurz, “The Policy of Imperialism,” Speeches, Correspondence and Political Papers of Carl Schurz, vol. 6, pp. 119–20 (1913).

Stella, the main character in ANYTHING BUT OKAY wonders about patriotism - what it is and who gets to define it. Her parents both served in the first Gulf War, and her older brother is an Afghanistan vet. She asks some of her parents' veteran friends how they define being a patriot.

Here's one of the answers: 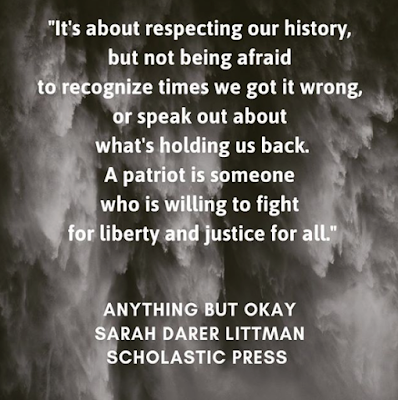 To me, being a patriot means not being afraid to asks questions. Questioning doesn't mean a lack of love for one's country. It means the exact opposite.

Posted by Sarah Darer Littman at 4:00 AM

Email ThisBlogThis!Share to TwitterShare to FacebookShare to Pinterest
Labels: Anything But Okay, book giveaway, Patriotism, Veterans