April is the cruellest month

APRIL is the cruellest month, breeding
Lilacs out of the dead land, mixing
Memory and desire, stirring
Dull roots with spring rain.

Never have those words rung more true for me than this year.

It has been a challenging six months.

We lost my father after a long struggle with Alzheimer's last November. Life has been so busy since then, there has barely been time to grieve. And so it comes out at weird times. I was in synagogue on the last day of Passover and for the first time I stayed for Yizkor service (memorial service for the dead). If both of your parents are still living, you leave the sanctuary for Yizkor. On Yom Kippur, I left but sat outside sobbing to my son Josh, telling him that I was afraid that it would be the last time I'd ever go outside for Yizkor.

Yet I've discovered there is a comfort in the prescribed rituals - sitting shiva, going to synagogue each week to say kaddish, even though I find reciting it each time an ordeal (Kaddish isn't Hebrew, it's Aramaic). Everyday life is so frantic that ensuring I allow myself the time to do these rituals means I'm making sure I've got time to left the grief out for at least a short time every week.

With the loss of Dad not yet healed, this month, April, has been the cruellest month indeed. On the second, we lost my children's uncle, Roby Littman, far too young, at the age of sixty. Even while desperately ill in hospital, Roby sent an email out that exhibited his unfailing sense of humor. As my youngest niece so sagely and sadly observed, "It's just not right" that he is no longer with us. He's left a very big hole left in all of our hearts. 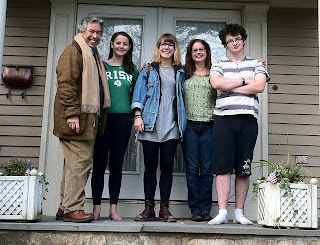 This morning I woke up to an email from the UK that another person we loved and cared about, the woman my kids called "Nanny Janet", passed away yesterday from cancer. My son called her "my third grandmother". Janet didn't always have it easy, but she was an amazingly positive person. She also taught me some great words like "bonce" (head) as in, "Oh dear, did you bang your bonce?" Here's Janet with her daughter Natalie and granddaughters Amy and Katie. 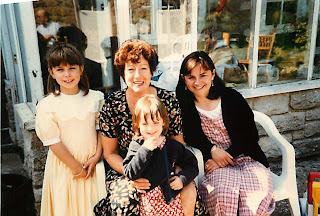 When one is hit by waves of loss like this, it's easy to ask the rather colorful question my son did this morning: "Why is life trying to kick us in the b*lls?"

And it does kind of feel like that. You start to dread that first look at your cell when you wake up - is there going to be another email telling me someone I love isn't here anymore? What bad news am I going to read today?

To combat that, I'm working really hard to focus every day on the things I'm grateful for. Always, the first thing is my family. I am so blessed to have a family that cares and looks after one another. If one of us is having a tough time, we know we can count on the others for support.

I'm grateful for the friends I have made in so many different spheres of my life, who challenge my thinking, make me laugh, give me hugs (either real or virtual) - especially the ones who don't send me Candy Crush Saga invitations :-)

I'm grateful that my journey in life has lead me to the point where I am finally making a living doing what I love the most.

I'm grateful for health insurance. After my dad died when I kept having really bad headaches including a migraine that lasted a week and they did an MRI and I had an "unspecified spot" and so they had to do another MRI with contrast...to rule out anything more serious - yeah, it would have really sucked if I hadn't been able to get health insurance after Anthem rescinded mine last year. And the insurance I got was cheaper and has dental. Thanks, ACA.

Forgive me if I seem shallow, but I'm going be grateful for a thing. It's my car. I'd wanted a convertible ever since I was a teenager and so two years ago I bought a secondhan hard top convertible - stick shift, twin turbo. I have had more joy per dollar from that car than anything I've ever spent money on for myself, ever. It's my therapy mobile. I'll be in a bad mood when I get in it, but then I take the hair tie out of my hair and put the top down and blast tunes and the wind blows all the cobwebs away. I'm grateful to feel that joy, especially when there's a lot of other life suck going on.

I'm grateful for T. S. Eliot's poetry, even though I was devastated when I found out that he was an anti-Semite.

What are you grateful for today?


Posted by Sarah Darer Littman at 6:45 PM 2 comments: Links to this post