"Political Correctness" and The Golden Rule

For years, we've been subjected to people complaining about "political correctness", but in the 2016 election candidate Donald Trump has made it an election issue in itself. 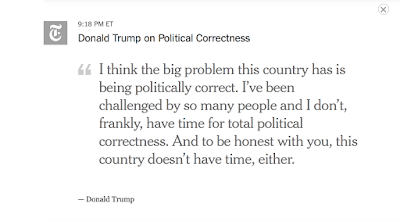 “I will present the facts plainly and honestly. We cannot afford to be so politically correct anymore. So if you want to hear the corporate spin, the carefully-crafted lies, and the media myths the Democrats are holding their convention next week. But here, at our convention, there will be no lies. We will honor the American people with the truth, and nothing else.” Donald Trump GOP Convention speech

Before I even get into the discussion of why I have such a problem with people who proclaim loudly "I'm not PC", let's just unpack the idea that political correctness means lack of truth, by looking at the Politifact record of non-PC "there will be no lies" Donald Trump and the woman he constantly (and immaturely) refers to as "Crooked Hillary." 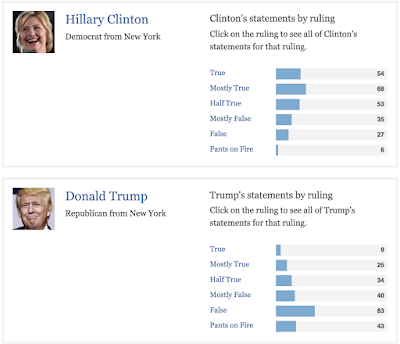 Well, what do you know? It appears Mr. Straight Talk is more crooked than the person at whom he's hurling the epithet. 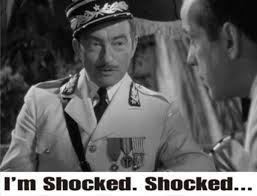 What was that childhood phrase? “I’m rubber, you’re glue; Whatever you say bounces off me and sticks to you.” Perhaps Mr. Trump never learned that in the school yard?

This last is what we call "The Golden Rule" and it is common to pretty much every faith and spiritual system in the world.

That which is despicable to you, do not do to your fellow, this is the whole Torah, and the rest is commentary, go and learn it." - Babylonian Talmud, Shabbat 31a

All things whatsoever ye would that men should do to you, do ye so to them; for this is the law and the prophets.
Matthew 7:12 King James Version

"And as ye would that men should do to you, do ye also to them likewise." Luke 6:31, King James Version.

"Respect for all life is the foundation." The Great Law of Peace.
"All things are our relatives; what we do to everything, we do to ourselves. All is really One." Black Elk

"Do not wrong or hate your neighbor. For it is not he who you wrong, but yourself." Pima proverb.

"Try your best to treat others as you would wish to be treated yourself, and you will find that this is the shortest way to benevolence." Mencius VII.A.4

"Tse-kung asked, 'Is there one word that can serve as a principle of conduct for life?' Confucius replied, 'It is the word 'shu' -- reciprocity. Do not impose on others what you yourself do not desire.'" Doctrine of the Mean 13.3

Hurt not others in ways that you yourself would find hurtful.
Udana-Varga 5,1

"This is the sum of duty: do not do to others what would cause pain if done to you." Mahabharata 5:1517

"Ascribe not to any soul that which thou wouldst not have ascribed to thee, and say not that which thou doest not." "Blessed is he who preferreth his brother before himself." Baha'u'llah

This is a sampling. You can find more at TheGoldenRuleProject.org

My friend Neal Byles draws the excellent webcomic With the Band and you should totally go follow him right this very minute on Facebook and Twitter. Here's his WWJD take on political correctness: 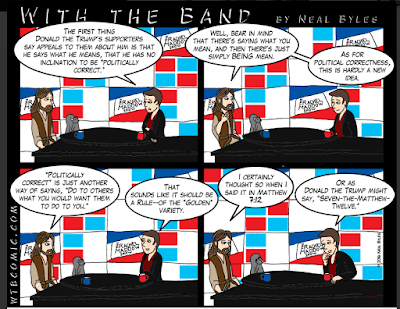 And another great one from Neal: 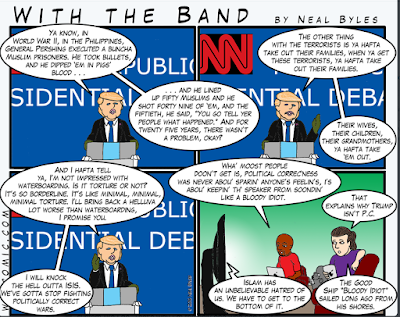 Remember The Golden Rule: treat others as you yourself would like to be treated. It might just help prevent you from sounding like a bloody idiot.


Posted by Sarah Darer Littman at 5:32 PM No comments: Links to this post

Eric Trump, Sexism and Misogyny - An Action Call to Men to ASK QUESTIONS instead of TALKING.

With the first woman being confirmed as a candidate for the office of President of the United States, the very same week that the serial sexual predator Roger Ailes was forced to resign from Fox News for allegedly harassing women for decades - enabled by his top staff, it appears, which makes it all the more sinister and revolting, this election is becoming a perfect storm for confronting the sexism and misogyny that most of us women have been facing for our entire lives - in school, in the workplace, in the legal system, in government, on the Internet, in dealing with companies, in advertising, in pretty much every facet of our lives.

Last week, I wrote a piece for CTNewsJunkie after Trump's unsavory campaign manager, Paul Manafort, said that women would vote for his candidate because “They can’t afford their lives. Their husbands can’t afford paying the family bills.”
As a woman who is self-employed, owns my own home, pays my own mortgage and makes my own investment decisions you can imagine I didn't take that very well. I am not alone. But this is the "America" this cave man and his cave man candidate apparently want to "bring back."
This is the "great" America they remember.

Let me tell you, it wasn't so great for women - and what makes me so furious is that I never imagined that the kind of sexism and misogyny that I put up with 30 years ago when I entered the workforce would still be in play - in fact even worse in some cases - when my DAUGHTER would be two years away from graduating college. Thanks to the religious extremists in this country (who ironically, are quick to blame OTHER RELIGIONS for being extremists) women - especially lower income women - in many parts of the country are struggling to find healthcare.

Yesterday, women were "treated" to Eric Trump the young, privileged white son of an older, privileged son, (both men who have got to where they were because they were born into wealth) - say this "Ivanka is a strong, powerful woman. She wouldn’t allow herself to be subjected to it".

I'm issuing a challenge to all the men I know - and even those I don't who might be reading this.

I'd like you to go and ask questions of all the women you know. LISTEN.

Ask them if they were ever put in a situation that made them deeply uncomfortable.

Ask them if random guys tell them to smile on the street, like it's their obligation to smile just to make a random guy on the street happy even if THEIR MOTHER MIGHT HAVE JUST DIED.


LEARN. I would love to hear back what you find out.


Posted by Sarah Darer Littman at 7:24 AM No comments: Links to this post