As we conclude the reading of each book of the Torah, it is customary for Jews to say these words, which mean: Be strong, be strong and may we be strengthened!

Today we read Parashah Vayechi, the last in the book of Exodus. Joseph mourns the death of his father, Jacob, and then at the end of the parashah,Joseph himself dies. And then the congregation recites those words, "Chazak, chazak, v'nitchazek."

Ever since my father died in November 2013, I've had a hard time saying and hearing those words without crying. Because I hear my father saying it to me, when I was depressed, or sad, or going through a particularly rough time in my life. Chazak. Be strong.

It's been two years since Dad died. Mom died suddenly and unexpectedly in March of this year. Every time we finish another book of the Torah I think, "Maybe this will be the time I finally hear those words without crying." 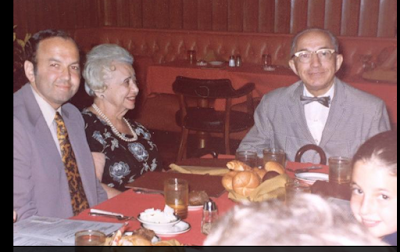 Now, more than ever, I miss my father, because I realize more and more each day I owe who I am to the person he was. How much of my knowledge of and interest in of history and world politics comes from sitting watching documentaries and war movies with him as a young girl. How I heard his voice in my head when I went into New York City two days before Christmas and instead of being distracted by my cell phone made sure I was aware of what was going on around me at all times because of the terrorist threat. Life goes on but be aware. CHAZAK!

I wondered today in synagogue if Dad's parents said that to him. In the picture above we are with my paternal grandparents, Harry and Mollie. I'm in the lower right corner.

2015 has been a tough year. But thanks to the guidance my parents gave me, my family, my friends, and my faith, I am still standing. Chazak. Chazak. V'nitchazek!
Posted by Sarah Darer Littman at 2:29 PM No comments: Links to this post

Emotion Regulation - because Life has no "Trigger Warnings"

There's been a lot in the news recently about trigger warnings on college campuses. Depending on who you listen to, they are necessary to protect those who have been through traumatic events and whose PTSD might be triggered by the material to be covered in class, or a symptom of the "PC police" coddling Millennials from true intellectual engagement. As someone who has suffered from PTSD from childhood sexual abuse (wrote about that here) I have stayed quiet on the issue.

Last night my daughter and I went to see Spring Awakening. I'd bought her tickets for Hanukkah, but I've been so busy with work and other life issues that I went into the performance knowing absolutely nothing about it other than that people said it was amazing. I didn't read the Playbill beforehand and so the entire story and performance was a complete surprise.

There is a scene where Martha and Ilse sing about the sexual abuse they experience ("The Dark I know Well"). During this scene, I was well and truly triggered. I felt sick to my stomach. I wanted to curl up into a ball. I wanted that song to END. Every second it went on seemed to last a freaking hour. I was deeply, deeply uncomfortable and unhappy and I did not like feeling those feelings or being in that place one little bit, especially since I'd paid no small amount of money for the privilege.

But I took deep breaths, and I told myself I'd get through it, and the song would end, and I'm not the child I was then, and it would be okay, and the song did end, and I felt sick for about another ten minutes, but then I was fine.

During intermission, I told my daughter that scene had been rough for me. She said that she'd wondered if I would have to leave, and I told her that it was okay, because I've learned how to regulate my emotions and breathe through it. I can't stop the feelings from happening, but I can sit with them and know that they will pass.

There were times in my life when I didn't know that, like when I was a teenager. Then, in order to not feel, I would get stoned, or drink. Or when I was an adult, when I would eat and then purge.

And this is why I'm finally saying that I don't think trigger warnings are a good thing. Because there are no trigger warnings in real life. You will be assaulted by these emotions when you least expect them and you have to learn strategies to deal with them. If you're constantly given warnings, you won't get the practice you need for a lifetime of unexpected triggers.

In terms of learning those strategies, what worked best for me was Dialectical Behavioral Therapy, which I did as part of my bulimia treatment.

But whatever you do, learning to regulate those emotions is going to be more useful in the long run than any number of trigger warnings.

Posted by Sarah Darer Littman at 6:54 PM No comments: Links to this post