You call this progress? Dumbing down our kids in the name of Education Reform

I've been working my tail off the last few weeks revising both of my 2016 novels, CHARMED I'M SURE (S & S Aladdin) and IN CASE YOU MISSED IT (SCHOLASTIC).  ICYMI is the one I told Mom I sold on a three page proposal. She died suddenly and unexpectedly four days later, so I have not only been writing and revising this novel through deep grief while helping my siblings deal with Mom's estate, I've been doing it on an incredibly short deadline. I think that qualifies as "grit" don't you?

In this latest round of revisions on ICYMI, my editor queried if high school students would know what the Rosetta Stone was. 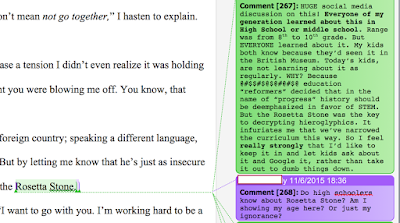 When something like this comes up, I go on social media and ask teens, HS teachers and media specialists for the answer. I also get answers from my peers who have kids of that age. What I found from this query was that everyone of my generation - ie/ graduated high school in 1980's or before had learned what the Rosetta Stone was in either middle school or high school.

Today - not so much. A few high schools yes. Most no. Some whose kids had been to London knew it, because they'd been to the British Museum. 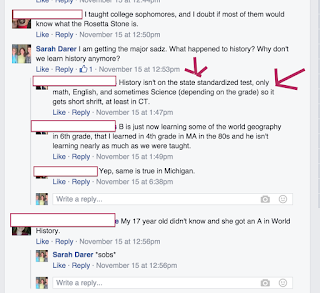 I've written many, many many times about how the overemphasis on standardized testing is damaging education.  But now, when we see candidates for the PRESIDENT OF THE UNITED STATE making claims that the pyramids were built by Joseph for grain storage it's all the more important that our kids know about the Rosetta Stone - so they know that it was the key to deciphering hieroglyphics and can use their critical thinking skills to put two and two together to realize "No, Dr. Carson, we know your bizarre theory isn't true because the Egyptians WROTE THIS STUFF DOWN!"

We need to study history so that as we hear all the anti-immigrant rhetoric being bandied about by politicians about Syrian refugees, kids know about the tragic voyage of the SS St Louis, "The Voyage of the Damned", a shipload of Jews trying to escape Hilter's Germany who were refused by country after country and were forced to return to Europe - many to their death. If you haven't read it, the US Holocaust Memorial Museum put out a powerful statement yesterday: 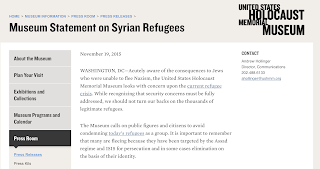 When I write about the overemphasis on standardized testing and STEM, I inevitably get anonymous commenters on my political columns making statements like this with no evidence to back it up:

Except then you look at the evidence: 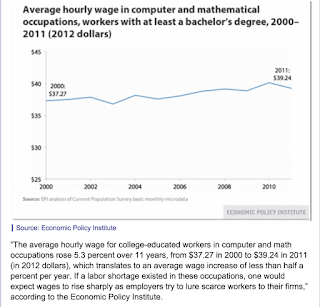 So we're narrowing the curriculum on the false premise that it pays. And meanwhile, we are taking away the very subjects that provide context and meaning. The subjects that help students develop empathy and theory of mind. The subjects that might prevent us from making the same mistakes we did in the past. 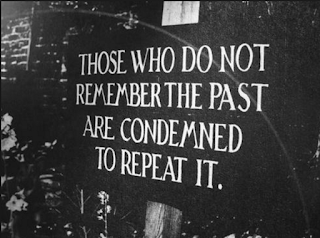 Posted by Sarah Darer Littman at 7:42 AM No comments: Links to this post

When I went to meet with my Writopia writing workshop kids this evening, I'd just read that voter turnout in my town was a mere 20%, and that really depressed me. I know it's not a Presidential election year, but municipal elections count. We're electing the people who run our towns and cities and perhaps most importantly, our schools. As it turns out, there was a late burst which brought us up to 33%, but still, that's pathetic.

If you don't vote, folks, you shouldn't complain when things aren't the way you want them to be. Yes, there are problems with the system, and yes, it often feels that our voices don't count nearly as much as the deep pockets of corporate interests, but not voting is an illogical option.

We always do a short writing warmup, and this evening, I spoke to my kids about how sad I was about the low voting turnout and so for the 10 minute warmup, I asked them to think about what issues would be important to them if they had the power to vote.

The answers were worth listening to - particularly for politicians.

That 10 minute writing prompt told me so much about kids in city schools.They want more from their education than core curriculum and standardized tests. They want arts and music and the things that other kids have.

Holding class in Stamford on the day after a woman was shot dead in a city park, these kids want gun safety laws.

But most this was the sentence that spoke to me most: "No racism!!! It kills people on the inside!!!"

Out of the mouthes of babes...

Posted by Sarah Darer Littman at 10:51 PM No comments: Links to this post