I am not a NYT best-selling writer. While my books have won awards and made lists, when it comes to publishing, I'm "mid-list". Sure, I hope that some day I will "break out" into the big time. There have been plenty of difficult and frustrating moments when I've thought "If I only could be inspired write about vampires/wolves/faeries/paranormal romance" or whatever the publishing phenomenon du jour happens to be. But alas, it doesn't work that way. I write best when I'm writing about a subject that fills me with passion. Maybe it comes from starting my professional writing life as a political op-ed columnist.


I've also been told that I'm hard to "brand" because the subjects of each of my books have been so vastly different. It makes it harder for readers to know what to expect when they pick up a Sarah Darer Littman book - unlike say a reader of Sarah Dessen or Ellen Hopkins.

LIFE, AFTER is my quietest book to date. It was well reviewed (well, except for Kirkus, but my reviews from Kirkus grow progressively worse with each book, so I'm expecting to be prostrate in bed with a chocolate IV drip after I read the one for WANT TO GO PRIVATE?) and was awarded a 2011 Sydney Taylor Honor. But it wasn't picked up by the chains and it hasn't set the world on fire.

Sometimes I get sad and discouraged, because I really love this book and it means a lot to me for so many reasons. But then, on Friday, I got an email from someone who had read it. She'd immigrated to the US with her family about five years ago* and identified so strongly with Dani, the main character in LIFE, AFTER that she thought that Dani's story was really my story, and asked me if I still kept in touch with the characters in the book, and how I dealt with my father. She told me that I was "a courageous woman" for sticking up for Jon with the bully. 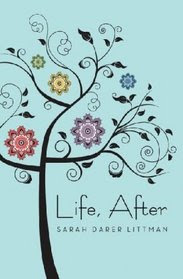 It really touched me that anyone would identify with my characters that strongly. I wrote back to her, explaining that I was born in the United States, but having moved to another country and been teased for my accent and using the wrong words for things, I did draw on my personal experiences for Dani. I told her that my son had been badly bullied in middle school, and that I wished there had been a person like Dani who had the courage to stick up for him when other kids were mean to him. And I told her that I know both how it feels to be depressed myself, and how debilitating it is for the entire family to live with someone else who is depressed and angry and refuses to seek treatment. So while LIFE,AFTER is a complete work of fiction, I drew on all of those things to write it.

I also wrote to her: I hope that Dani's courage will always inspire you to stand up for anyone you see being treated unfairly. It's not always easy to do what is right, but it is so, so important. Edmund Burke, a famous British statesman and political theorist said: "All that is necessary for the triumph of evil is for good men to do nothing." That goes for women, too. (He lived a long time ago, when women weren't as liberated).


I thought I was writing to a teenager. But she wrote back to me today and told me more about herself. She is working at a job she was told by her father was the job that was available to her. But her mother (who I want to celebrate and hug) has been encouraging her and her sisters to study and learn and be independent. So she is studying to get a degree in what she really loves, while working at the job she was told was the only option.

She wrote that her mother has told her that "education is very important for everyone and especially for women. Books are the gateways to this world."

Her mom sounds like one wonderful and wise woman. I wrote back to her, telling her how my dad told me I would "never make a living as an English major," and how I worked at a job I didn't enjoy for years until I finally started doing what I loved when I was 38 years old. My message to my own children - and to the kids I speak to in schools - has been very different - that yes, it's important to make a living, but they should try to make a living out of their passion.

I thanked her for the gift of writing to me, asking her to keep in touch, and told her this:

My books might never be NYT Bestsellers, but I feel like my life has been a success when I receive a letter like yours, telling me that my words have resonated with and helped to give hope to another person.

This is why I write. The rest is gravy.

Email ThisBlogThis!Share to TwitterShare to FacebookShare to Pinterest
Labels: fan mail, Life After, Why I write