Why I enjoy revising my will 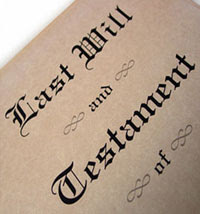 I met with my lawyer to revise my will yesterday. The last time I did it was in 2007, not long after my divorce was finalized. I figured given the acrimonious nature of my divorce, it probably was a good idea that I change my advance medical directive so that my ex no longer was the person who decided if they should pull the plug on me in the event I was incapacitated, or had power of attorney over my affairs.

When I signed that revised will,  I was so happy. The lawyer and the person who witnessed it said that they'd never seen someone so thrilled to be signing their last will and testament, but I felt like a huge weight had been lifted from me, because I'd organized things so that if anything happened to me, I knew everything was organized for my kids in what I hoped would be the best way possible, and with the values I'd tried to teach them while I was alive.

I was prompted into this revision by two things. Firstly, a tweet from Neil Gaiman linking to old blog post of his about literary trusts .  This was something I'd never thought about before. My literary legacy. When I did my 2007 will, I only had one book out. Now I have four out, not to mention eight years worth of published political columns, several essays, and many archive boxes full of unpublished work. So the literary executor became something I really needed to consider.

The other thing was that The Awesome Boyfriend, who I'd only been dating for a short time when I revised the will in 2007, is now a permanent and important part of mine and my kids' lives. We aren't married, but if anything happened to me, I wanted to make sure that the courts recognized that.

Looking back over my old will and thinking about the changes I wanted to make, made me appreciate how much my life has changed for the better in the last four years. It's easy to get overwhelmed by the crises that hit on a day to day basis (because OMG, they do) but sometimes it takes revising your will and looking death the face to make you realize that you've actually come a long way, baby.

If you haven't made a will, please don't put it off, especially if you have kids. It's SO important.

Posted by Sarah Darer Littman at 10:34 AM