Today is World Alzheimer's Day, and once again I'm celebrating the special person in my life who is afflicted with this devastating disease, my beloved father, Stanley Darer. 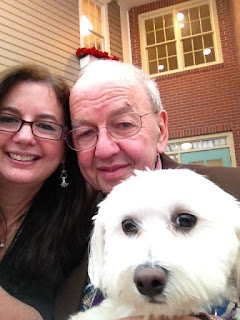 Since I wrote about Dad last year on World Alzheimer's Day, his condition has deteriorated somewhat, both physically and mentally. He can't walk as well as he used to, and sometimes has to use a walker, although he doesn't like to. When I visit, I hold his hand. His confusion has definitely increased. It seems to go down in steps, plateau for a while, then deteriorate a bit more. The Awesome Boyfriend asked me if I thought Dad still knew I was his daughter. I said, "No, I don't think so. But his face still lights up when he sees me, and he definitely knows I'm someone who loves him and who he loves."

And deep inside, he still worries about me. I've often told my kids about how difficult it was for me growing up because my dad had the double standard common to his generation between his male and female offspring. It was a source of tremendous resentment and frustration as a teenager.

I still remember exactly where I standing as a young woman in my 20's, working on Wall St and putting myself through business school at night for my MBA in Finance, when my dad told me: "I won't relax till you're married and have a man looking after you."

I was speechless for a moment, thinking of how I'd always worked so hard to prove myself, how I had to work twice as hard as a guy to get credit, deal with sexism constantly, and went ballistic. "Who's looking after me now?!" I shouted.

The other day when I visited Dad, we were sitting on a bench holding hands and he asked me a question he quite often does when I visit: "So are you married?"

These days, the question doesn't make me ballistic. I smile, and explain that I was married, I got divorced, but I have a mensch of a boyfriend that I've been with for six years. Dad smiles, and I know that somewhere, deep inside, it makes him feel better to think I have "a man looking after me."

And I smile, instead of going ballistic, because I know that thought makes him relaxed and happy.

On Rosh Hashanah, I asked The Awesome Boyfriend to come with me to visit, so Dad could see living proof of my "man". Because we'd gone to services, we went in the afternoon, and Dad tends to be more confused then. AB and I think Dad thought the AB was my son, because he kept commenting on how much taller AB was than the last time he'd visited.

We decided to take Dad for a walk in the garden because he seemed really confused and we thought the fresh air and exercise might do him good. On the way outside, we passed some of his friends who were gathered round the TV watching The Sound of Music. And he introduced me to one of the other seniors as HIS CHILD. I almost started crying - because he REMEMBERED. He doesn't remember my name, but he remembered that I was his daughter, at least for that moment, and it meant the world to me. 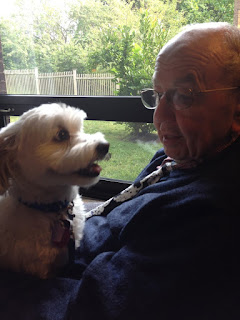 
On September 30th, my mother and I are participating in the Walk to End Alzheimers. If you are able to donate to help us reach our fundraising goal, to help find a cure for this horrible disease.