There was another horrifying story of an accidental gun death today. A five year-old boy in Kentucky shot and killed his 2 year-old sister. The mother was home, but had stepped outside for a moment.

But what struck me about this story, was that this five year-old boy accidentally killed his sister with "the .22-caliber rifle he got for his birthday," according to state officials.

The .22 was a Crickett, advertised on their website as "My First Rifle." 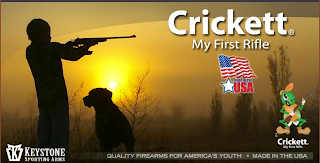 What "gift" have these parents given this poor kid? A lifetime of guilt, knowing that he killed his baby sister, when he was too young to even bear the responsibility for doing it. But it's not him who should bear that guilt. It's his grossly negligent parents. And it's the gun manufacturer that is sick enough to purposely market firearms to children. We don't allow tobacco companies to market cigarettes to children. Why do we allow gun manufacturers to market guns?