Boycott or Mob Justice? My answer to the Casey Haters


On July 21st, I wrote a column for Hearst Newspapers which I am reproducing in full below because as the author I contractually own first rights after publication.*

DANGEROUS REACTIONS TO THE CAYLEE CASE

A young-adult-author friend of mine received two disturbing emails through her website earlier this week.

The first read: "I am sending you this email in reguards to the justice Caylee Marie Anthony didn't receive...This child was failed by our justice system...The supporters of Caylee don't want her mother becomming Rich off of her Death... The word is out that Trident is working on a deal to have her write her story... There will be many emails and phone calls from the supporters of Caylee... Please help in this fight to keep Casey Anthony from becomming rich off the Death of Caylee. Robert Gottlieb, Chairman of Trident Media Group, made the statement in USATODAY that she's entitled to tell her story and Trident would be interested ."

The second was even more disturbing: "This is to inform you that you books are now blacklisted due to your working relationship with Trident Media Group. Trident is offering to pay Casey Anthony for her story. Promoting a child killer is unjust. These are the people you have chosen to publish your stories. Good luck with sales now."

Leaving aside the fact that my friend is no longer represented by Trident, and that Trident Media is a firm of agents, not "publishers," there's a much more pertinent question here. Why on earth is an author who has absolutely nothing whatsoever to do with a capital case in Florida, in which the accused was acquitted of murder, being sent threatening emails that might potentially cause damage to her career?

It's a symptom of the mob justice insanity that has surrounded this case and continues to be whipped up by irresponsible people in the media.

Florida author and parent advocate, Sue Scheff, who purports to be one of the "top 5 Parenting Experts to follow on Twitter" has written pieces encouraging her readers to join the Facebook hate groups "I hate Casey Anthony" and "F*** Casey Anthony." She justifies this irresponsible "journalism" (and I hesitate to even use the term here) because she has determined - probably from watching Nancy Grace, who with this trial proved that she's crossed the line from journalist to carnival barker, that the jurors, "didn't have a full understanding that circumstantial evidence is evidence [and] ... that they didn't understand the jury instructions."

It couldn't possibly be that they saw and heard all the evidence and she didn't, or that the prosecution bungled the case. Just this week, the The New York Times reported that the prosecution might have withheld exculpatory evidence from the jury. No, Ms. Scheff is online tweeting links to the FB hate pages to her followers, repeating the mantra "Accept not respect" and using the hashtag #idiotjurors.

I started following Ms. Scheff on Twitter because she writes about online safety issues for teens, and was thus appalled to see someone who warns parents about the dangers of cyber bullying doing exactly that. In a series of tweets, I said as much to her: "With all due respect, isn't this modeling cyber bullying for teens, which you have written against? Our kids look at our actions, much more than they listen to our words. Liking `hate' pages undoes everything we've told them. There are much more positive ways to express your outrage. Give to charity. Volunteer at a shelter for abused kids."

Casey Anthony was judged by a jury of her peers in a court of law. We might not like the verdict. Our hearts break for Caylee Anthony, whose life was tragically cut short. But as citizens of the United States, we either respect the law and behave like civilized human beings or we turn into savages, led by Nancy Grace. I chose the former.


Clearly this piece is making its way around the Casey haters, because last night I started hearing from them on Twitter:


I should known from my experience as a political writer not to engage, but it was late and I was tired and yeah, I'd had a glass of montepulciano while I was cooking the bolognese earlier. So I tried to reiterate in 140 characters why they were being unfair to my author friend. 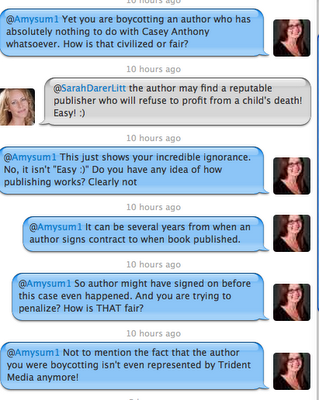 AmySum1 then lets herself off the hook with this:

Um...how does she know? I've never mentioned the author by name. And with this napalm approach to boycotting, the Casey haters are going to be catching many innocent people who have nothing whatsoever to do with her crimes in their crazy net of vigilante vengeance.

Oh wait. You think I'm unfair for saying they're a little over the edge in their hatred? Read this tweet:

This morning, I got another round of tweets: 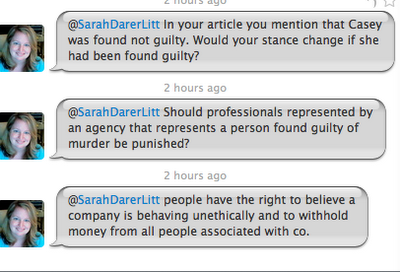 I know these ladies are working together, so I'm going to attempt to answer all their questions here. This is my final word, because I've learned from 8 years as a political columnist that further engagement is futile. Therefore I will not respond to any comments you might leave, so don't even bother. You can just complain about what a "pinhead" I am amongst yourselves.

Elizabeth: You ask "Should professionals that are represented by an agency that represents a person found guilty of murder be punished." And you feel that "people have a right to believe a company is behaving unethically and to withhold money from all people associated with co."


and TMHCO says that I don't "understand what a boycott is."

I understand full well what a boycott is. I'll even give you a definition so we make sure we're all on the same page.

BOYCOTT: to refuse to have dealings with (a person, organization, etc) or refuse to buy (a product) as a protest or means of coercion.

But here's where you ladies and I differ. I strongly believe that a boycott should be directed only at the people who are responsible for the perceived wrong. So no, Elizabeth, I don't believe you should boycott professionals who are signed with an agency whose head mentions that he MIGHT sign Casey Anthony.

Because let me tell you a little bit about publishing.

These authors might have been with that agency since before Caylee Anthony was even born. I don't know how old Trident Media is, but in the case of my agency, some of the authors could have been there before CASEY Anthony was even born. These are long-standing relationships, kind of like marriages. There are contracts involved. But more than that, there are relationships involved. An agent is the person who guides you, helps you navigate the stormy seas, listens to you cry on the phone about how you're such a loser and then tells you to shut up and go write another book. It is not "Easy :)" to move, as AmySum1 seems to think. If I told you ladies to get divorced and find another husband tomorrow "Easy :)" what would you say to me?

Well, telling an author to get another agent is a similar thing. And let me reiterate in case I didn't make it clear enough to you. A BOYCOTT SHOULD PUNISH THE PERSON OR COMPANY WHO IS RESPONSIBLE FOR THE ACTION AND ONLY THAT PERSON OR COMPANY.

So if you don't want to buy Casey Anthony's book, fine. If you want to write threatening letters to the head of Trident Media so he doesn't represent her, Fine. But for you to write threatening letters to authors who have nothing to do with her case? SO NOT FINE. That is not a "boycott." That is mob mentality. And like it or not, you, ladies, are a mob.

PS: back to the crazy hater thing...Right before I posted this, I got another tweet

So anyone who knows me personally for a microsecond knows how much I love kids. Or even some of the 770,500 viewers of Q & A, the animated video of the StoryCorps interview between my then 12 year old son and me who don't know me personally get that idea.

Because I don't HATE Casey Anthony, Porcelain10 now assumes I don't love kids? There are more nasty tweets since then, but case closed, people. I have nothing further to say, because these "ladies" have just made my point for me.


*I would like to point out here that this means that NO ONE other than Hearst Newspapers of Southern CT and me have this right. Under Fair Use, you may copy a small portion of the article and link back to this blog or to the Greenwich Time, Stamford Advocate or CT POST websites. YOU MAY NOT REPRODUCE THE ENTIRE ARTICLE IN FULL ANYWHERE ONLINE WITHOUT MY EXPRESS CONSENT. (or, paying me). THIS IS THE LAW, KIDS. If I find you have broken it, I can, and will sue you.
Posted by Sarah Darer Littman at 10:02 AM