I was just emailing ubercool author and editor Dan Ehrenhaft this morning about how real life is often stranger and more humorous than anything we authors can make up.

And BINGO! As if to prove my point, life decided to throw another example my way.

I'd emailed Dan from the very long security line at LaGuardia airport, where I was dropping my daughter off for her flight to visit a friend in Florida. It was her first unaccompanied flight so we were both a bit nervous, and the airport being a complete zoo did nothing to assuage our anxiety. But her flight got off fine, and I headed back to CT.

We'd visited my dad yesterday and he was very upset because his watch strap broke. Dad is suffering from Alzheimers and has been in a residential facility since March. I took his watch and promised I would get it fixed and return it to him as quickly as possible. Ten minutes later he would pat his empty pocket where the watch had been and start to tell me about how upset he was about his watch and how he couldn't understand how he'd broken it. I'd reassure him that I'd taken it and would get it fixed. "Don't worry, Dad," I kept telling him. "I'm on this. It's all under control."

So on the way back from the airport, I went straight to NAGI Jewelers in Stamford (great service, use them!) The man in the service department was able to fix the watch in less than a minute. Then I hit the hardware store for some bulbs. Finally I made it to the residence where Dad lives and signed in. They were having a music and dancing for the residents, and everyone was enjoying "Roll out the Barrel," which always kind of cracks me up when I hear it in the nursing home for some reason. Dad saw me right away and was so excited and relieved to get his watch back.

But as I'm hugging him, one of the nurse aides who happened to be standing behind me taps me on the shoulder says, "Did you realize you've got a huge split down the back of your pants?"

It took me a minute, because, you know, "Roll out the barrel" was pretty loud and my dad was talking to me at the same time, because he was so happy about his watch, but when it finally clicked what she said, I reached behind me and felt...BARE BACKSIDE.

Because (and forgive me if this is TMI) I was wearing a thong, and the split was indeed big, and my forty-something year-old, not particularly shapely butt was there hanging out for the world - or at least all these seniors with various degrees of memory impairment to see.

See what I mean? You cannot make this sh*t up.

Because my entire day up to that point suddenly replayed itself before my eyes, but this time with my ass hanging out. LaGuardia airport...CROWDED LaGuardia airport. The very nice jewelry store, where the guy didn't charge me for fixing Dad's watch. The hardware store. And now, the nursing home, with all these elderly people with frail hearts.

Dad's still thanking me for fixing his watch but all I can think about is my butt. I feel my face starting to flame. Fortunately, the very nice nurse offers to get me a garbage bag to wrap around my waist.

I talk to Dad with my back against the wall, trying to explain that I'm going to have to go home and change because I have a wardrobe malfunction, but I'm glad he's got his watch. Nice Nurse comes back with the garbage bag and I try to wrap it around me, which is really confusing my father who can't understand why I would want to wear a garbage bag. I try to explain again about my trousers ripping and my butt hanging out, which makes him smile (at least one of us is laughing) and Nice Nurse makes sure I'm all covered. Then I kiss Dad goodbye and head home to change. 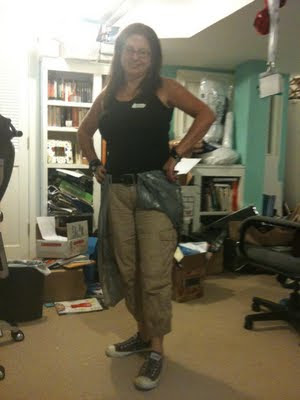 Actually, I think the garbage bag look is kind of stylish. Maybe I can just pretend to be all hipster about it. "I wore Hefty Bags BEFORE THEY WERE COOL."